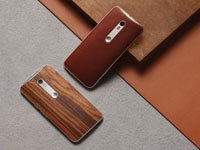 Lenovo has already released for smartphones and Moto Z-Moto Z Force update to Android 7.0 Nougat. Next in line should be Z Moto Play Moto Moto G4, and G4 Plus. Despite the fact that the flagship line of Moto Z received update only up to Android 7.0, last year’s model can be updated immediately to Android 7.1.1. Earlier this month, in the database benchmark GFXBench was seen Moto X Play preloaded with Android operating system 7.1.1 Nougat, and recently with the same version of the OS, there appeared the Moto X Pure Edition.